In the "Dundee Courier" 'nostalgia' section (!) a trip down memory lane to The Smiths concert at the Caird Hall 35 years ago to-morrow.

Interviews with a few fans, with the attendant legally-required footnotes and apologies du jour {í am sure these people do disagree with whatever they believe to be his 'right-wing views', but there obviously is the thought that if you go public with any sort of Moz luv now, even in the 'nostalgia' section, to avoid the risk of on-line abuse in the wonderful world of 2020, you have to deliver such as the following ~ “I’m not a supporter in any way, shape or form of Morrissey’s controversial comments, quotes and opinions over the intervening years and find them deeply offensive” }

Otherwise, a sweet piece. Would be interested in seeing the snaps of M. feeding grapes to the...
The Smiths
Continue…

Rolling Stone has updated their 500 Greatest Albums of All Time list, and three of the Smiths albums previously listed have been dropped. Only The Queen is Dead remains, and, although it has moved up from its previous position to #113, it is shocking to see some of the albums that ranked better! The 500 Greatest Albums of All Time

The classics are still the classics, but the canon keeps getting bigger and better

Not sure if this been mentioned, but Morrissey did submit his list of albums to RS

(scroll down; right above Stuart Murdoch!)

I wonder if any of Morrissey's votes made it into the final 500...

Matt Berninger (The National) on The Queen is Dead

matt of the national grows up listening to queen is dead

...Jump to high school, and my sister joined a Columbia record house or something like that. It was great, it was a lot of music for really cheap. And my sister brought home—I remember in that first batch—she had The Queen Is Dead, she had Under a Blood Red Sky, by U2.

SS: The live one?

MB: Yeah, the live one. I think she also had Violent Femmes. And so I remember it wasn’t until I was like a sophomore or something that I then heard Violent Femmes and then I heard The Queen Is Dead.

When I was riding around on a golf cart, picking up—I worked at a driving range. And so I worked the front, you know, I washed the balls. I worked at the front counter, I worked at the candy desk, I fixed the video game. This was right down the road from where I lived in Miamitown, Ohio...
Other People/Bands The Smiths
Continue…

also a checklist at 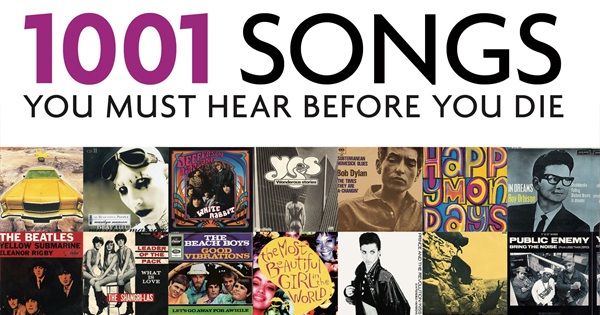 This is the most recent edition of the book "1001 Songs You Must Hear Before You Die", released in 2017.

Finally this film will be released in 2021.

variety.com
AMC Networks-owned RLJE Films has swooped for U.S. rights to “Shoplifters of the World.”

Inspired by true events, “Shoplifters of the World” is set over the course of one night in the life of four friends who are reeling from the sudden dissolution of British band The Smiths. The same evening, a local radio station is also hijacked by an armed, impassioned Smiths fan, resulting in a madcap evening that sends up the spirit of the 1980s.

Starring Joe Manganiello (“Magic Mike”) as the radio DJ and Ellar Coltrane (“Boyhood”) as the hijacker, the film also stars Helena Howard (“Madeline’s Madeline”) and Elena Kampouris (“Before I Fall”). “Shoplifters of the World” is written and directed by Stephen Kijak (“We Are X”) and also features 20 tracks from The Smiths.

I've only just got to this.

There are some really interesting cassettes listed in the auctions. Nerds assemble!

THE SMITHS - WHAT DIFFERENCE DOES IT MAKE/HAVE I - SMILE MUSIC LTD DEMO CASSETTE
What is the track Have I?

THE SMITHS - EDEN STUDIOS DEMO CASSETTE (BEFORE FIRST ALBUM)
Eden Studios was where the debut album was put together from the various studio...
The Smiths
Continue…

Hey music junkies the Professor of Rock always here to celebrate the greatest artists and songs of all time with our latest edition of The New Standards. Morrissey and Johnny Marr of the Smiths wrote “There is A Light That Never Goes Out” while working on their 1986 masterpiece “The Queen Is Dead” this is the story of the classic song and it’s impact on our culture. Including commentary by Brendan Urie of Panic! at the Disco and Justin Furstenfeld of Blue October. A very personal and insightful video on the greatest band of the 80s.
The Smiths
Continue…

What song are you listening to right now?
I replace the word 'magic' with the word 'love' and enjoy this music video...
15 minutes ago
Light Housework
Post Whatever You Are Thinking At This Very Moment
My poem in video format. Guess I'll call it Selfy Love.
35 minutes ago
Light Housework
Dundee Courier: "‘Morrissey kissed me on the...
“I’m not a supporter in any way, shape or form of Morrissey’s controversial...
Today at 6:18 AM
BookishBoy
It’s not about politics
Today at 5:44 AM
morrissey frink thread!
Ameri should have followed Morrissey's advise :unsure:
Today at 5:24 AM
countthree
Stephen King's Baby Dog. NOT PUPPY!!!
Stephen King's Baby Dog. NOT PUPPY!!! STEPHEN KING CAN'T HAVE PUPPIES YOU...
Today at 2:09 AM