...My updated, improved (god knows so much cosmetic surgery was essential) repaired, revised, repackaged version of Meetings with Morrissey is now being published in F-F-F-French (!) by Camion Blanc on May 15th 2011. It's been re-titled You Know I Couldn't Last - Entretiens Avec Len Brown. No doubt all serious critical journalists will review it as Excretions With Len Brown so I may as well get the crap pun in first!​ 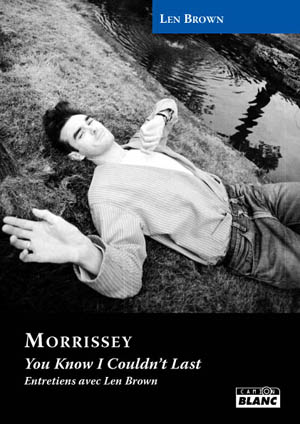 Pete Paphides tweets that he turned down interviewing Morrissey this year

Pete Paphides has just revealed (via twitter) that he turned down a Moz interview this year...


I was offered a Morrissey i/view this yr. Glad I said no. It doesn't occur to him that most of us are as reluctant to meet him as he is us.

I'm sure everyone is as gutted as I am?
Continue…

Statement from Morrissey on True To You

I'm sorry I made the Detergent O Leary radio interview so difficult but I was in a foul mood, having spent a full week surrounded by the royal dreading. England may very well be a Windsor dictatorship, but - PR Weddings aside, it is usually quite bearable.
If my Front Row (Radio 4) interview sounded chopped and cropped, that's because it was. I had spoken fluently about the royal dreading, but an Iranian censorship confiscated all of my views. It is distressing, but in all manner of British media in 2011 we are only allowed to hear the same old thoughts and feelings expressed over and over and over again.
During the week of the royal dreading, Poly Styrene died. Having made an enormous contribution to British art and sound – at a desperate time when so many of us needed her, Poly Styrene's death was all but ignored by the British television news media...
Continue…

From The Official UK Albums Top 100:

I got my Glamorous CD yesterday and the promo video on it has been taken directly from the Malady DVD, you can even see the title in the first split second! Does that mean that the new DVD will be pieced together from the three DVDs we already know? That would be disappointing, to say the least!

I don't understand why he won't release a COMPLETE collection of promo videos anyway ... at least up until the seven year break.

...I received the album yesterday, and the DVD really is in NTSC ... and naturally, the videos look worse than their respective counterparts on Hulmerist/Malady. What the hell were they thinking?
Continue…

Credit for this is given to hipsterdisco.

This promotional Video was put together in the early 1990s for a multimedia exhibition organised by Rough Trade which would have raised money for the Terrance Higgins Trust.

The planning ended when Rough Trade went into liquidation & The video was therefore only half finished. It would have had band footage over-layed {like the "Ask" and "Panic" videos}
Continue…

Is Coronavirus as serious as they say?
No it won’t.
1 minute ago
bhops
Morrissey Central "THE NEXT DAY" (February 26, 2021)
David is so ridiculously sexy
7 minutes ago
rifke
Morrissey A-Z: "Driving Your Girlfriend Home"
I think it fits in with "what do you see in him?" - as in, the narrator is...
Today at 12:27 AM
Amy
Post Whatever You Are Thinking At This Very Moment
Frightened Animal Non compliance Is esteemed But courage fails My mask is...
Today at 12:14 AM
Light Housework
A "Cosmic Dancer" record review from someone...
An interesting review of this week's "Cosmic Dancer" from the perspective of...
Yesterday at 11:39 PM
Morrissey signature
You should leave an unfavorable review - his rating is amazingly good.
Yesterday at 10:25 PM