Alex Lusty met Boz Boorer backstage at a Morrissey concert in December 2004 at London's Earl Court. They were soon recording together and their first musical collaboration was 'The OneThree' and the album 'Life Goes On' was released on black records in the autumn of 2005. Now they have both finally found the time to record new material, and Happy Martyr was born. Described as 'urban folk' or Ian Dury fronting early T Rex, the duo's music is a raw sounding, stripped down acoustic rap crossover. Tracks for the debut album were recorded between London and Boz's Serra Vista studio in Portugal, which was also the backdrop for the video to accompany debut single 'Painkillers'.
Continue…

Just received a text message to say that Clint Boon is interviewing Johnny Marr on XFM tonight. Don't know if it's a repeat from 2008, but most likely it's a new one.

Summary posted in the original thread by jm26:

Still in touch with Mozzer by email etc. "fragmentally" was the word he used (I think; or something similar). Talked about shared humour, being friends etc. and agreed with Clint that Mozzer will be remembered for hundreds of years as a great wordsmith.

Came across as a top bloke, as he always does.​
Continue…

Who else but he would choose this image to promote the tour? 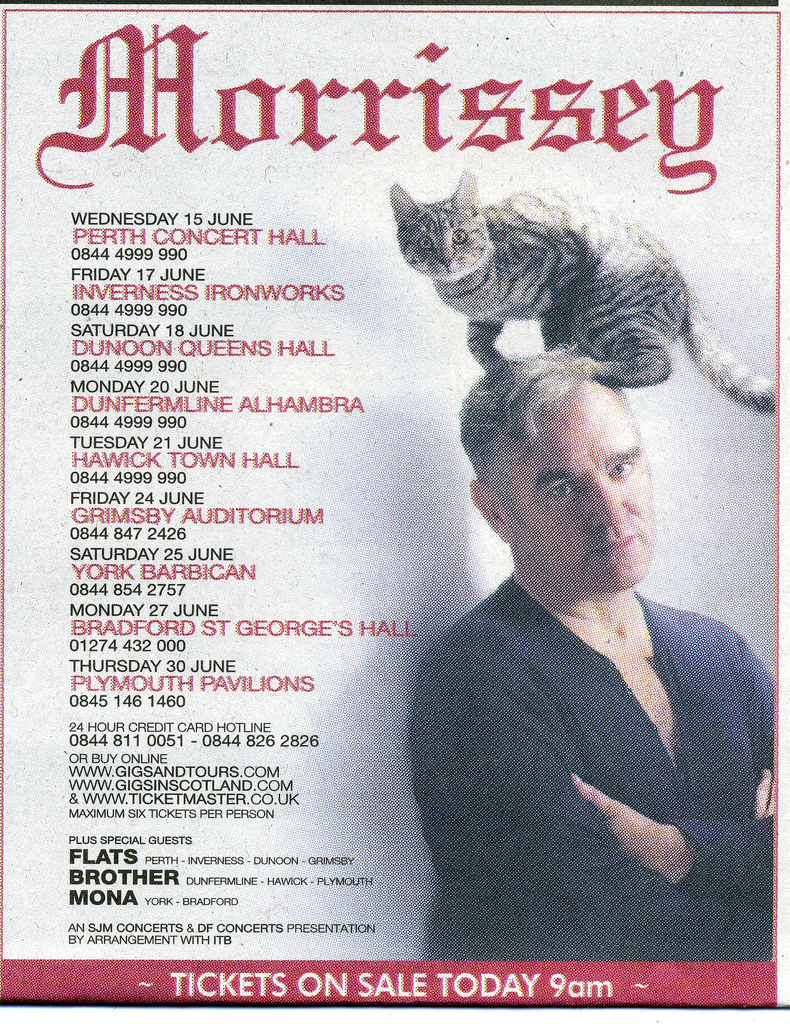 "Why does Morrissey love performing in small venues in provincial towns?" - The List magazine

The List magazine in Scotland has published an article discussing why Morrissey has chosen to play small, provincial venues on this tour.

Why does Morrissey love performing in small venues in provincial towns? - by Kirstyn Smith, The List

A snapshot of any Morrissey gig at any given venue at any point in his career paints the same (vulgar?) picture. From the bequiffed to the balding, via gladioli and vegetarianism, a congregation of grasping hands reach and strain towards the stage where the Pope of Mope stands at his electronic pulpit offering up something unseen, be it confirmation or salvation - or simply a reason for his followers to keep the faith.
Continue…

"Oh, and one other thing. I recently met up with a certain Mr Morrissey for the first time in nearly 20 years. I think we were both apprehensive about meeting but after 5 minutes we were getting on so well it was truly a magical moment. I am so pleased to have met up with someone who has been such a big part of my musical journey after a prolonged period of time and I hope we can stay true friends for ever."​
Continue…

From a link on Bookface.
Continue…

Working in all mediums from music, to collage to film to theatre to pure art, Linder Sterling first rose to prominence in 1976 as one of the main players in the fertile and vibrant Manchester punk scene, and helped to define the aesthetic which helped make Manchester the key punk city alongside London. But although her influence on that scene and beyond has been enormous, it often gets overlooked to the extent that she seems to have been consciously written out of Manchester’s musical history. For instance, there is no Linder in Michael Winterbottom’s film of all things Mancunian and musical; 24- Hour Party People. But hopefully, Linder: Works 1976–2006, the recently published and definitive anthology of her artistic output should help...
Continue…


I was reading The Radleys by Matt Haig, a novel about a vampire family who are “abstainers” living in suburban England not far from York, trying to blend in incognito with their human neighbors. Up cropped a Smiths reference and a Morrissey reference. Moz is in excellent company, other names dropped included Bowie, Nick Cave and Joy Division. Good book, and the author obviously has good taste too!​
Continue…

David Bowie & Morrissey: "Cosmic Dancer...
When I read the excerpt, I first thought it was about Bowie - reminded me...
1 minute ago
Nikita
Young pop singer Olivia Rodrigo wearing...
she's just 17 right? proud that the sad kids of my generation (myself...
4 minutes ago
anorakcity
Hardcore/powerviolence
i think categorising music in genres is necessary because there are so many...
10 minutes ago
anorakcity
Morrissey A-Z: "Bengali in Platforms"
Is it, though? In the 70s?
26 minutes ago
GirlAfraidWillNeverLearn
Rockonteurs - Johnny Marr podcast
It's different with family though - might be too close to see a problem.
Today at 12:41 PM
Nerak
"Kill Uncle" at 30: Oddball album or timeless...
Remain excited Lambach. Think of it like it’s the Sao Paolo gig all over...
Today at 10:27 AM