this site is a place where anything goes, but bookface is a different fish 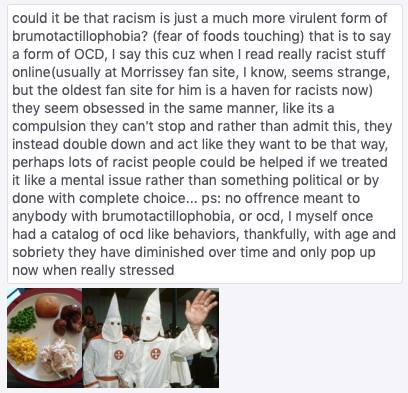 banned for the 3 days for posting this a few days ago, was informed of the sentence today
I'm absolutely certain this was done without any idiot at their organization reading the post, they just saw a klansmen and boom, banned
this has happened before, I once made a post about how college athletes are basically treated like slaves because none of them make any money and universities make billions off of them here in the USA, but I included and image of a slavery era plantation, and boom, automatic ban
facebook seems to think that the mere showing of images about racism makes you a racist, this is actually quite more dangerous than people actually saying racist things, but this is 2019, a world of extremes, where one site on the internet encourages racism, this one, and another, the one with all the real power goes out of its way to squelch any discussion of race, what a world...
Share:
Facebook Twitter Email Share Link

words like N*** [Hitler fasccist regime, killed more than 6 million people in deathchambers] used a lot so Robby in fact it's rascism against you,, from what I read yours was absolutely not a reason to you, reading posts from several idiots who do nothing more on this site than trolling and make comments comparing with yours they should be banned forever, just my 2 cents Robby, David put the moderation in some doubtfull moderators.Take care Robby, I hope you're not leaving because of this, like to read about you upcoming China trip and becoming healthier by losing weight, because you do very well, waving from the Netherlands [should I be afraid of getting banned writing this or are blogs private?]
[SIGPIC][/SIGPIC]

http://www.gemeentebest.nl
oh no, sorry, thats a post from facebook, don't think people get banned from here anymore, no matter the racism or lies they post about other people