12ft Morrissey puppet to be paraded in Manchester 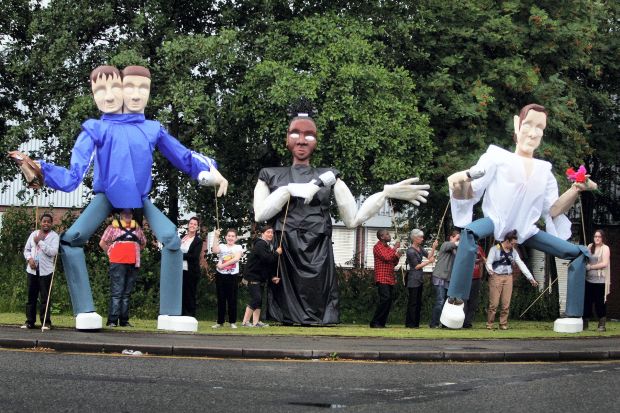 Never saw this picture before either:

An Anniversary Tribute to the Ultimate Smiths Album, 'The Queen Is Dead' - Rolling Stone
By ROB SHEFFIELD
Continue…

Perhaps this explains his "mood" last night? Its clearly a dig, as the NFU represents the meat industry.

Morrisey urged to back Scottish fruit and veg - Farmers Guardian

NFU Scotland has called on rock star Morrissey to give his backing to Scottish fruit and vegetable growers during gigs in Scotland, which kick off in Perth tonight (Wednesday, June 15).


A prominent vegetarian, Morrissey has allegedly insisted that meat be removed from the menu at the venues on the Scottish leg of his tour, which takes in Perth, Inverness, Dunoon, Dunfermilne and Hawick.

The union has written to Morrissey and his record company asking him to use this decision in a positive way as it presents an opportunity to insist all catering at the concerts be based on local or Scottish produce, which would give a ‘significant boost’ to the many...
Continue…

...found little titbit about Morrissey in this months 442 magazine. There is interview with Pat Nevin in there ( ask your dad kids ) - he was first "post punk" footballer and made his name at Chelsea before going onto Everton.

This lifted verbatim from interview:

Is it true that you went around Morrissey's house and Norman whiteside was climbing over the fence?
Amazingly yes I was friends with a friend of Morrissey's and he invited us over. Norman was meant to be meeting us and it's an extremely long story but he ended up jumping into Morrissey's garden. The thing that surprised me most was that Morrissey had a gym . He's actually quite a strong guy.

I would bet this was from Moz's time in Cheshire in late 80's when both Whiteside and Nevin would have been at Everton . Whiteside (again ask your dads) used to play for Manchester United
Continue…

Links to reviews from an anonymous person:


I first met Morrissey 25 years ago at the tender age of 14 and it changed my life.

Back then there were no camera phones but I did get him to sign my 12 inch copy of The Boy with the thorn in his side (still my prized possession).

~I was lucky enough to appear in Dickie Felton's book - The Day I met Morrissey and have a chapter of my own.

Yesterday I had the great honour of meeting Morrissey again as he was rehearsing for the tour in Dundee which as you know kicks off in Perth tonight (only a few hours to go!!)

After waiting for 2 and a half hours at the stage door of the Caird Hall he arrived (after an unscheduled and accidental crossing of the Tay Bridge) by bus.

I asked him to sign my book which he did and my hubby took a snap he also shook his hand!
It was somewhat surreal as Morrissey did not speak - I guess he was saving his amazing voice to treat us all later!​
...
Continue…

Johnny Marr on The Smiths TOTP debut in today's 'Guardian'

As part of The Guardian's 'history of modern music' today it's INDIE. In the 50 key events in the history of indie music they decree that The Smiths debut on Top Of The Pops in November 1983 is No.28. They've got Johnny Marr to pen a nice little piece ~

The Smiths make their Top of the Pops debut
November 1983: Number 28 in our series of the 50 key events in the history of indie music 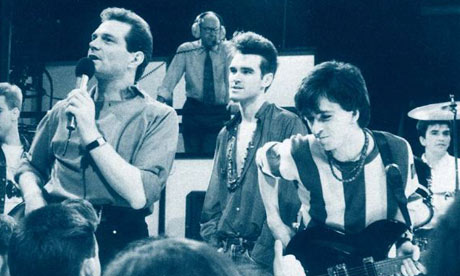 What song are you listening to right now?
Song For Wild Turkey
10 minutes ago
The Wild Turkey
Morrissey Central "94 Years Old Today" (August 4, 2021)
Tony Bennett is 95, thought it was about him....
17 minutes ago
NealCassidy
Painting and Drawing
Is that the singer from Bad Manners !!!
29 minutes ago
Post Whatever You Are Thinking At This Very Moment
Halifax Piece Hall would be a great venue for Morrissey to play, I saw...
Today at 12:47 PM
Surface
Music Week: Johnny Marr signs new worldwide...
o_O WTF? nobody has asked :handpointright::guardsman::handpointleft: to...
Today at 11:53 AM
Vegas Shows in jeopardy
You would have to wear a mask on the plane!
Today at 11:29 AM
Geoffrey Ingram