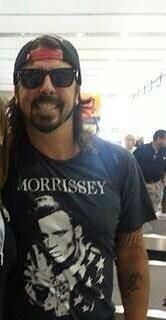 Kristeen Young said on her Twitter page that Grohl plays drums on her new record.

Playcat2000 said:
Cant be that great of a company if they cant get the picture right!
Click to expand...

it's safe to assume it was intentional...

Playcat2000 said:
Dave Grohl? He's brilliant. And a great drummer AND guitarist and he's funny as hell. I love him. I just hate the shirt.
Click to expand...

I agree with you playcat - I like Dave Grohl, too, but that shirt is hideous. And, it's not a crime to think so...

awful shirt. he makes garbage for music and seeks the spotlight at every chance. send him, McCartney, and Springsteen away, away, away.
A

MOZtonMA said:
awful shirt. he makes garbage for music and seeks the spotlight at every chance. send him, McCartney, and Springsteen away, away, away.
Click to expand...

He's in good company with Kristeen Young then
A

Mrs. Phyllis Torgo said:
Anybody over the age of 14 who wears graphic joke t-shirts probably has nothing of value to say to anyone.
Click to expand...

Don't write nonsense like that and half-step with "probably." Dave Grohl is not my favorite person but "graphic joke t-shirts" are almost the uniform for someone in his profession.

Mrs. Phyllis Torgo said:
Anybody over the age of 14 who wears graphic joke t-shirts probably has nothing of value to say to anyone.
Click to expand...

Yes, let's leave the graphic joke stuff to the GIF wizards here on this site.......*smirks*
Enjoying Morrissey's fall from grace into ignoble ignominy!

hand in glove said:
I agree with you playcat - I like Dave Grohl, too, but that shirt is hideous. And, it's not a crime to think so...
Click to expand...

Not a crime, but very precious and snobby. Grohl should dress 'appropriately' for a Pop Star and you're the one to guide and advise him. He should wear Dries Van Noten and Gucci.

Despite his generally tasteful appearance, Morrissey's hardly Beckham or Clooney. In fact, your smugness makes me feel like starting a thread entitled "Morrissey's Crimes Against Fashion" which began with the fedora hat thingy before "Meat Is Murder". And those yellow slacks he wore on stage whilst tying his shirt tails in a bow, ffs.... The priest outfit was a huge error, too obvious given his entry level Celibate trope. If he'd have worn it on TOTP in 84, that would have been rad, but he left it too late and just looked like a Sinead O'Connor copy clone. And being photographed in trainers when not exercising, which is only acceptable for baseball/basketball players, and Beckham, of course.

Let's not forget the ultimate faux-pas, the "f*** Morrissey-Solo.com" catwalk disaster.......actually, Morrissey is 9/10 in dress code etiquette and a huge influence on male fashion. Unfortunately, unlike Beckham and Clooney, he is incapable of suggesting or projecting eroticism no matter what he wears. Just like Dave Grohl is a heteronormative yet asexual entity like the rest of the at those endless heavy rock/metal festivals at Donnington and the like.

Morrissey's clothes are far more interesting than his music lately, even if it's all a bit Hollywood interior designer chic now and then. Still, Martyn Lawrence Bullard is hilariously OTT and it's nice to see the tiresome assumptions linking dress sense to sex, gender and sexuality deconstructed by one and all, from Becks to Moz to Martyn. Now, Kurt wore a ballgown to the Reading Festival, and yes, I suppose Grohl did Pantomime transgender chic for a video but it was a safe re-tread of Queen.

So let's all relax and let everyone wear what they like. Especially you 'handinglove'. Get your purple day-glo onesie on and cavort around to "Boy's A Looker". Don't upset yourself thinking about Grohl's harmless t-shirt. The Fashion Police will not arrest you for crimes against aesthetic criticism. The Fashion Police use all their energies trying to apprehend Bono. And Simon Cowell.

wishing all love, harmony and a wallet to allow ethical and ecological retail therapy for clothes. It's Saturday! Let's all shop! Rescue the economy! All buy a Gucci shirt to attend "Morrissey 25" film night, bring flowers to throw at the screen. Rip up expensive designer shirts to continue the consumption/production/comsumption waste cycle. Insist every cinema has 300 Dyptique candles to provide ambience. And a champagne reception with vegan nibbles. Come on, folks! We can make this a night to remember, a legendary beacon on the road to the graveyard which we all face even if some of us can postpone it for longer with access to top notch private health care and not be trapped on a bog with Montezuma's revenge giving us the heebie-jeebies, "Like, OMG! WTF! Am I gonna do an Elvis and die on the crapper! How not cool! If I must die, I will die in Hollywoood! Oh no, I've got skidmarks on my designer boxers! My salt grinding factotum better know my laundry code or I'm going to really wig out"
Last edited: Aug 24, 2013
Enjoying Morrissey's fall from grace into ignoble ignominy!

You obviously didn't know. You're not very clever. Which is why we all thought you were a 14 year old girl. Not an ageing simpleton...

OK, its not like I can be objective on this matter

for when my oldest, dearest friend took me to see Nirvana many a year ago*
it was one of the greatest musical experiences of my life

and yes, the drummer was as almost as memorable as Kurt, they will always have a place in my musical heart

however, in the 17 years since Kurt died, Dave G has made maybe a dozen songs I like, 4 I really like, one in particular and it took til 2011 for him to make an album worth owning:

having said all that, I get that the shirt was insulting because it compares our Moz with Vanilla Ice
however, I think he would be as likely to wear a shirt with say "Kurt Cobain" on it, but the name reading "Justin Bieber"
its clearly a comment on "Pop icon hood" and contrasting one "meaningful artist" with a piece of pop trash

I further believe that what is behind someone as dare I say it? Erudite as Dave G, is that he too, like me, has had / or heard about
someone putting on the Queen/Bowie classic "Under Pressure" and people suddenly talking about "Vanilla Ice"
and if you don't get what I mean by that, then what's the point?

If it were this picture I'd wear a tee gladly.

There is no such thing in life as normal.
J

I vote "thumbs way down" on the shirt. I enjoy satire, but this just didn't do it for me. Vanilla Ice heard about my thoughts, in regards to the shirt, and he was pissed. This is the Ice's eloquent & heartfelt response to me.....

Luke Action McClure said:
You obviously didn't know. You're not very clever. Which is why we all thought you were a 14 year old girl. Not an ageing simpleton...
Click to expand...

grohl, you are NOT ALLOWED to be a Morrissey fan !

dunno who it is, more James Dean than Morrissey

Anyway nice Dave Grohl wearing a t-shirt with the letters Morrissey on it.

http://www.gemeentebest.nl
You must log in or register to reply here.