David Miliband is a British Labour politician, who has been the Member of Parliament for South Shields since 2001, the Shadow Foreign Secretary since 2010 and was the Secretary of State for Foreign and Commonwealth Affairs from 2007 to 2010. He is the son of the late Marxist theorist Ralph Miliband. He and his younger brother Ed Miliband were the first siblings to sit in the Cabinet simultaneously since Edward, Lord Stanley, and Oliver Stanley in 1938. He is currently a candidate to succeed Gordon Brown for leadership of the Labour Party. 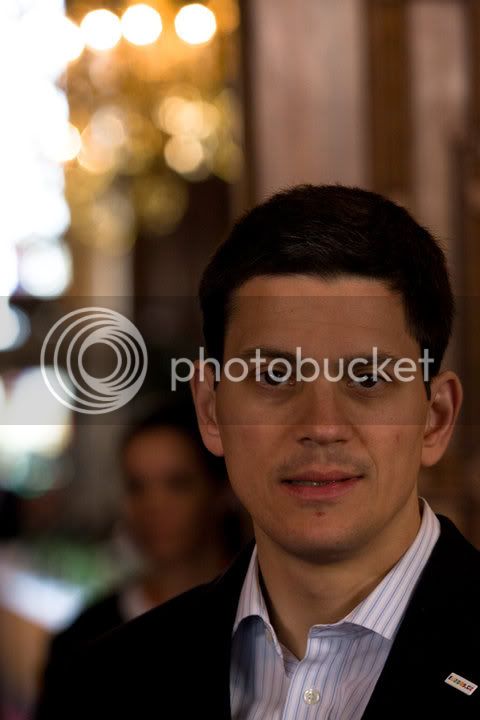 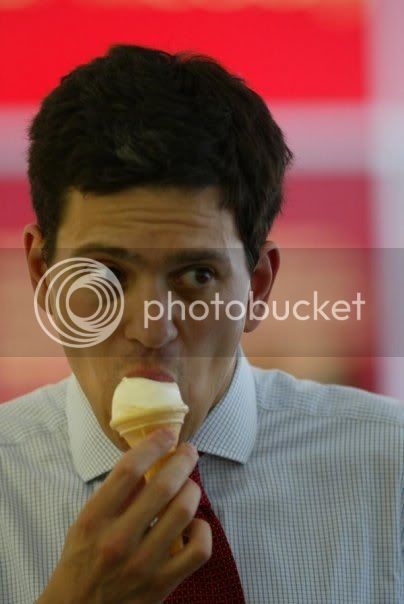 Political frink (I assume)? My my, soloers really are branching out these days... Chairman Of The Bored

He certainly is the hotness.

I think we should get behind Diane Abbott though. She's two thirds of the way to Morrissey's dream PM.

Emotional Guide Dog said:
He certainly is the hotness.
Click to expand...

Emotional Guide Dog said:
He certainly is the hotness.

I think we should get behind Diane Abbott though. She's two thirds of the way to Morrissey's dream PM.
Click to expand...

Id rather get behind Miliband,or preferably in front.

1. David went to state comprehensive schools in Leeds and London

2. David was Secretary to the Commission on Social Justice, set up by John Smith, which led to Labour’s minimum wage and better rights for families.

4. David was behind ‘Building Schools for the Future’ a programme to rebuild and refurbish every secondary school in the country and he helped introduce thousands of new teaching assistants to the classroom

5. As Foreign Secretary David has stood up for human rights in Pakistan, Sri Lanka and the Middle East and spoke out against the invasion of Lebanon by Israel

6. David was a major contributor to Labour’s manifesto for the 1997 General Election which brought the party to power after 18 years in opposition

7. David was the first Foreign Secretary to write a blog

8. As a supporter of Arsenal FC David’s favourite player of all time is Dennis Bergkamp

9. David’s favourite book is the Gruffalo and his favourite poem is Roots and Wings

10. David’s snack of choice is a Twirl
[SIGPIC][/SIGPIC]lainey

billy scissors said:
Id rather get behind Miliband,or preferably in front.

A bit more about David.

I am here because of Labour values. My parents fled persecution in Europe during the second world war and found refuge in this country. They encouraged me to join the Labour movement which they saw as the home for people to work together to create a better society.

I saw Labour values in action at school and was taught in state schools by inspirational teachers. I went to a primary school near Leeds and Haverstock Comprehensive in London.

I have tried to live out Labour values. My first job was for the National Council for Voluntary Organisations. Later I was part of the Commission on Social Justice, set up by our late leader John Smith, and had the privilege of working for Tony Blair and being part of the team that helped Labour return to power in 1997.

In 2001, I was immensely proud to be elected the MP for South Shields – a place I love. This constituency is home to the warmest people and the nicest fish and chips, and has political traditions built on mines, docks and shipbuilding.

During Labour’s time in office, I served in a number of departments. I am particularly proud of helping to implement our schools’ building programme and introducing the Climate Change Bill. As Foreign Secretary I tried to focus on combating the routes of terrorism, using our influence to tackle the world’s conflicts, and highlighting the need to fight global poverty and climate change.

I am married to Louise, who plays violin for the London Symphony Orchestra. We have two lovely boys, Issac and Jacob. We all share our time between South Shields and London. Thats all well and good,but have you got any with his shirt off? very nice....and so is the ice cream tl;dr but thanks for putting those parts in bold in the first post.

Bah, Miliband's Labour right. His father had the sense to know that the parliamentary LP was doomed if they lurched to the right.
"We want rebel music. Crisis music. Now music. Music that knows who the real enemy is. Rock against racism. Love music hate racism."

Ive heard of him because of an incident with Sergei Lavrov 2years ago:
"Sergei Lavrov, the colourful Russian foreign minister, became so incensed that he reportedly barked: 'Who the f*** are you to lecture me?'"

Read more: http://www.dailymail.co.uk/news/art...dinary-rant-David-Miliband.html#ixzz0p8wrF9Ck
And people like you
Make me feel so old inside
Please die

If Milliband does become Labour leader, then all three party leaders will be younger than me.

Does this make me officially middle aged?
"Some have said that I'm far too clever. That confuses me, because it's like saying that this industry is really only there for philistines and empty-headed goons"

All Over Battersea said:
If Milliband does become Labour leader, then all three party leaders will be younger than me.

Does this make me officially middle aged?
Click to expand...

It makes you old. Each to their own - Frink wise.

But when he speaks - he's Tony Blair 2.0 right down to the speach patterns and hand gestures. It's freaky.
You must log in or register to reply here.

I
Obama is 'uninspiring', says British ambassador to America

L
It just gets worse and worse for George Galloway.....